This post falls more in the “meaning of life” category than photography, but there you are.

I’d been hoping to take part in Calvin Trillin’s Come Hungry tour—part of the New Yorker Festival—for years; but until this year, when we moved to New York, it had always presented logistical difficulties. This year, my wife was kind enough to give be a ticket for my birthday, and that was that. And while I cannot in truth say that we moved to New York specifically to make it easier to attend the tour, I also cannot in truth say that it wasn’t a factor.

Trillin has been writing for the New Yorker and other publications since the 1960s, and has written a good deal about the joys of good food. He is, in the way of many New Yorkers, opinionated. (I remember his discourses on barbecue years ago, and his conviction, apparently since reconsidered, that no place that served barbecue on actual plates could possibly be worth eating at.) So, I thought, what better guide.

About 40 of us met Sunday morning at 11 at a location revealed to us at the last minute (hey, can’t have hangers-on hanging on), and set off in search of some chow. Those assembled were assembled from all over (I think Sunnyvale, California was the furthest location) and we trekked off in search of matzoh. Matzoh, you say? People go in search of it? Yes, but matzoh from the Blue Ribbon Bakery is unlike any other matzoh in the world: herbed, and with a light sprinkle of parmesan. As Trillin pointed out, had the Jews known about these matzohs early enough, they never would have left Egypt.

On our way to Soho we had green sandwiches, delivered from a shop in Chinatown. (Some of his favorite haunts are too small even for an intimate group of 40, so a few samples were eaten on the sidewalk.) The greens were, if not broccoli rabe, very like broccoli rabe, sauteed and in a small sesame bun. That set us up for potato pizza at Grandaisy Bakery. I’m a real pizza fan, and I’ve had everything from wood-grilled pizza at Al Forno in Providence to wood-fired oven pizza margherita at The Village Hearth in Jamestown, RI, to, well, just about every style out there. My big prejudice can be expressed simply in these instructions to the would be pizza chef: it’s pizza, so don’t be a moron and make it a casserole. So I was a bit trepidatious about the idea of potato pizza, despite the passing of the great carbohydrate scare. I needn’t have been. And then there’s the cauliflower pizza. 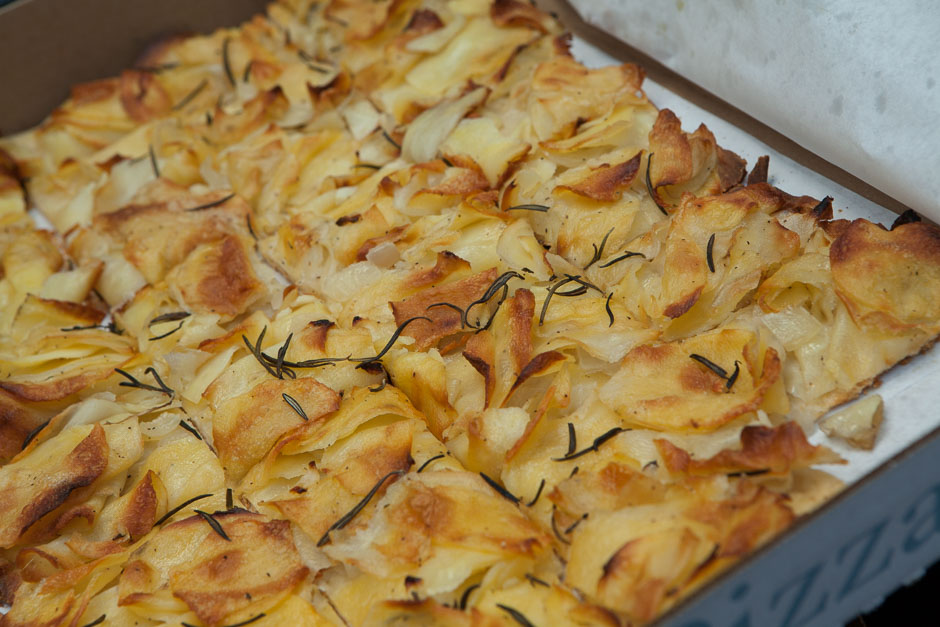 The stroll’s pattern was dictated by geography rather than by cuisine. I don’t mind mixing cuisines; and this was, after all, a voyage of exploration, so if you’re sailing off in search of Cathay, and come across, say, Cuba, on the way, you might as well stop for a bite.

Despaña was our next stop, for some tortilla. Despaña is Spanish, not Mexican, and a Spanish tortilla is very like an Italian frittata. And the tortillas there are otherwordly light and delicious. And their cantimpalo and other cold cuts are terrific.

And more on the rest of the tour in the next post!