Portraits of an artist

Fatto a manoYou do what?

I first met the Norwegian painter Jone Ketil Rimestad back in 1997. I wasn’t familiar with his work, but I loved it when I saw it, and we hit it off personally. We’ve seen each other intermittently over the years, sometimes at openings of his shows in N.Y. and elsewhere, and sometimes just socially. We speak on the phone a lot, particularly through the dark Norwegian winters. Two things immediately struck me about Jone: his feelings come out in his works (the oil sketches he made on his first trip to N.Y. took me aback: the buildings loom and curve in over the viewer); and he has an astoundingly accurate memory for colors. 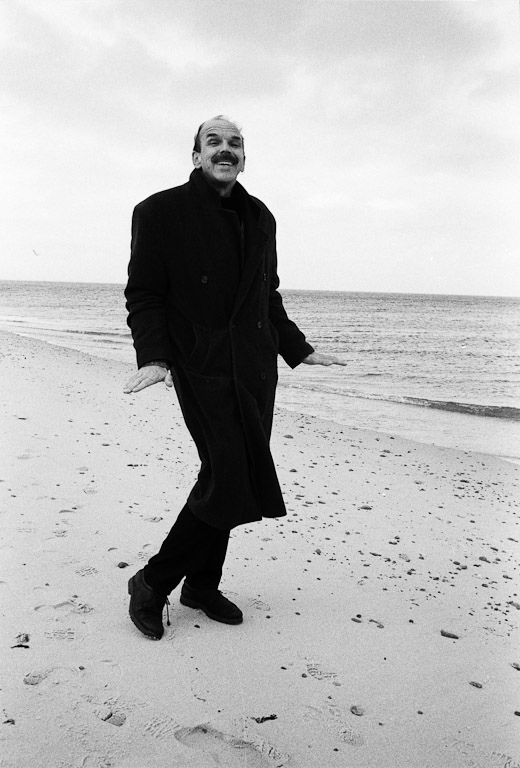 The first portraits of him that I made were on a Cape Cod beach in winter. He was, as you can see, lively and jumping around. (Cape Cod winters are as nothing when compared with Norwegian winters, which helps explain his exuberance when most of the locals were likely huddled by their fires!) I think the portrait really captures his exuberance and playfulness.

Jone came to visit a week or so ago, and we spent some time getting caught up and some time poking around the Rhode Island coast. Jone is also a sailor (despite the headscarf, he’s not a pirate), and he likes old nautical stuff, so I did this by a rusting breakwater.

I made a few portraits at home, of him with one of his paintings. Pretty simple lighting—one lightpanel catching late afternoon window light. Jone hated it, so I took it down.

(Oh, yeah, the lightpanel. He got intrigued by that, and did this Omar Sharif as Sherif Ali in Lawrence of Arabia thing.)

We wound up at Beavertail Light in Jamestown. While we scrambled on the rocks, explored the remains of WWII defenses, checked out the foundation of an earlier lighthouse, I took some photos. Just before we were about to leave, I saw the sun raking across the white bricks of the old lightkeeper’s cottage, Jone stood in the doorway, and we took advantage of the perfect angle and color of the late afternoon sun. The texture of the white painted bricks was hard to deal with, but it reminded me of the impasto of his paintings. (I think we popped a little light into the shadow side of his face with a reflector.) There’s a lot to be said for simplicity. And paying attention.