Does the world need another photographer’s blog?

We all have expectations. We all make plans. We all get disappointed when the plans don’t turn out as expected. As a photographer, a good part of my job is to understand my client’s expectations, and—at the least—meet them. I always try to exceed their expectations, and I usually succeed. And that takes practice.

So when Rhode Island wedding photographer Seth Jacobson asked me if I were interested in shooting with him and a model he knew, I jumped at the chance. No client to please, no ideas too dumb to try, no expectations. He knew a model looking to build her portfolio, I had a couple of new light modifiers to try, Spring was here, and off we went on a late, warm afternoon, about two hours before sunset, to a few locations in Saunderstown and Narragansett, RI.

Obligatory field of daffodils shot. Seth, me, Brianna, her boyfriend Robbie, field o’ daffodils. (And yes, we did get the owner’s permission to shoot there.) New beauty dish worked out as I’d hoped, but despite the fact that I once sailed a lot, I hadn’t given much thought to the notion of windage. Of which there was plenty. Fortunately, Robbie is a big guy, and held the light in place. (No point in having a monolight with beauty dish sail off into the road or the bay beyond. Hard to admit to the insurance company that you’re basically an idiot.) Since I’m an iconoclast, the beautiful late afternoon light was backlight, and the gelled beauty dish the key. Memo to self: good thing you brought the stepladder, because if people could see the row of houses behind the field it wouldn’t have worked as well.

Location two, a beach on the bay, was pretty boring since the sun was low enough to leave it in the shade, so after a quick inspection, off to the rocks in Narragansett. Know when to hold ’em, know when to fold ’em.

Location three. Great, dramatic location, with lots of exposed, worn rock ledge, and tidal pools. Rocks still in the sunlight. Hard to get to, especially when you’re wearing heels. (FYI Seth, Robbie and I were not wearing heels. Brianna was, and thought she was better off with them on. Go figure.)

Brave, well-balanced woman. We shot there for a while. The wind had picked up, the muddy path on the way to the rocks (didn’t I mention the mud?) dissuaded me from bringing the lighting in, a Sherpa an assistant was nowhere to be found to do it for us and hold it down, so we worked with the direct, available, beautiful, late afternoon light.

On the road again … Last  location, 15 minutes further down the road. (Funny how much you can do in a short time if you set your mind to it.) Beach near a fishing area. Bumpy dirt parking lot. Scruffy beach grass. Litter. Sunset maybe 20 minutes away.

Quick shot to get the exposure for the lights, and Brianna trying to keep warm in a borrowed jacket. Monolight, plain reflector to deal with the windage, but no gel—the wind had really picked up,  the gel just wouldn’t stay on, the temperature was dropping, Brianna standing in a dress and heels in scruffy, littered beach grass, getting colder by the second, a few minutes shooting, the sun set and it was all over.

What was I saying about expectations? Right. I had none going into the shoot. And I got a range of images, from pretty woman in a field of daffodils, pretty woman on the rocks, through mysterious woman under a lowering sky. (I really like the test shot, with Brianna in the jacket, mostly because she’s just being herself.) 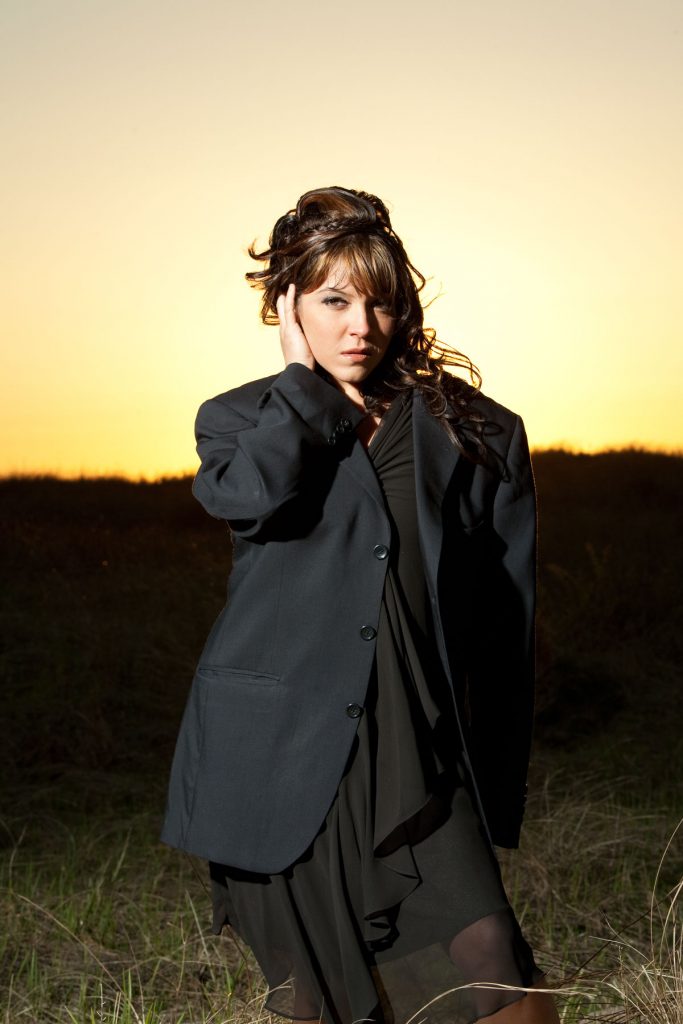 A good range for a couple of hours fun work. See more of the images, and a few behind-the-scenes shots, here.