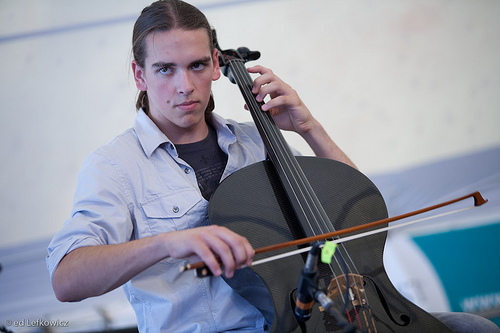 I like music. OK, I really like music. It’s embedded in me somehow. I usually wake up with a tune in my head, a fact to which my wife will attest. And I like to photograph musicians, in the studio and in performance. So with a couple of days off recently, I went to Summerfest, in nearby New Bedford, Massachusetts, to see some performers I knew and some I’d never heard before. Although I wasn’t working, I did have a camera, and, of course, took some photos. A lot of other people were taking photos, too, with everything from cell phone cameras to DSLRs.

If you’re at a performance, and want to take some photos, there are a couple of obstacles to overcome. While this blog isn’t intended to be a how-to-do-it blog, it occurred to me that some general advice on this subject, especially at this time of year, might not be ill-received. So I thought it best to break the issues down into manageable chunks.

Access: you probably won’t have close access to the stage, so try to get to the venue early, and sit in the front. Depending on the nature of the concert, and the location of speakers, you may want earplugs if you’re in front. (As someone who often works right next to the cones of some pretty impressive speakers, I think I’m a reliable resource on this one.) Now your photos are less likely to have an audience member’s head in them.

Light: There’s probably enough light for photography, but you should probably set your ISO up as high as you can and still get a good image. (Point and shoot? Test ISO ahead of time. Small sensors record a lot of noise.) Forget the flash. With a point and shoot, or even a DSLR with a built-in flash,the flash won’t go much beyond 10 or 12 feet anyway, so shut it off, save the battery, and stop annoying people. And here’s a complication for you. If the venue is a tent, and in daylight, you may get a lot of white (or almost white) tent in the frame. So? So if you leave your point and shoot on automatic it will think it’s looking at an “average” scene, and the whole thing will look dull. So use your exposure compensation setting and try +1 exposure compensation. (That’s like telling the camera, hey, there’s a lot of light in this scene, not middle tones, so expose it some more to make the light areas look light.)

Light, Part 2: The light in the venue is probably a mix, especially outdoor venues and in tents. And “white” tents are often not optically white. So unless you want some wacky or inconsistent color casts, try to get a white balance from something in the photo. Mics and mic stands are usually pretty close to neutral gray, so your eyedropper tool should be able to pick it up. 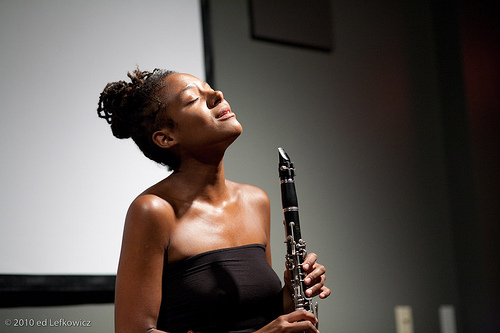 Steady, steady … You may be working at slow shutter speeds, even if your lens is at it’s widest aperture, so you’ve got to hold the camera as steadily as possible. (Image stabilization helps, but it’s not perfect.) So if you’re up for it, bring a monopod for support. Not up for it? rest the camera on something. (In bar venues, I’ve used beer bottles for support. Really. Too down market? WIne bottles also work.) Barring that, hold as steadily as you can, and squeeze the shutter release while you’re breathing out slowly. An if you set the camera to take a burst instead of just one shot, often one in the burst will be steadier than the others.

Sight lines: Back in the days before amplification, you could see performers. (Way back in teh day, if  you were, say, at a house party in Québec, the fiddler was likely to be up an a table, so y ou coudl see really well. But I digress.) These days, your vision is likely to be obscured by microphones, mic stands, wedge monitors and the like. Some guidelines: For individual performers, off to the side is better than directly in front. Most performers move their heads back and forth somewhat, so look for this times when their faces aren’t blocked by mics. If you’re interested in performers playing particular instruments, find a point of view which will show the instrument to advantage. (For guitarists, violinists, cellist and the like, I like to be audience left of center, so I can see some of the face of the instrument, the performers face, as well as both hands.)

A few more photos from 2010 Summerfest in New Bedford, Mass. here. So get out there, listen to some real music, support the musicians, and take some pictures. Oh, and if you see other photogs, please give them space, at least once in a while.